PARENTS CHOOSE TO BE IN FAMILY COURT 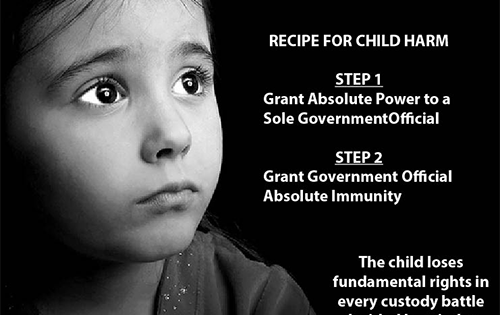 JUST ANOTHER OF THE MYTHS AND LIES OF FAMILY COURT

The reality is that marriage is a private family association protected by the 1st and 14th Amendments according to the U.S. Supreme Court. Divorce is just the flip side of the free association right, for no association is truly free if the parties may not end it at will. If it were to receive a fair hearing—unbiased by emotion, religion, and tradition—requiring a court suit to divorce would be found to be an undue burden on the fundamental right of free association.

The parent-child association is likewise protected by the 1st Amendment. It is independent from the marital relationship and cannot be constitutionally affected by the dissolution of the marital association. The U.S. Supreme Court has said that simply requiring a parent to litigate a child custody dispute is so burdensome on the parental right that it implicates constitutional protection. Simply forcing parents to battle for custody violates their constitutional rights.

Most states, if not every state, require divorcing parents to enter into this battle. In Texas, its Texas Family Code Statute 6.406 that requires divorcing parents of minor children to also file a Suit Affecting the Parent-Child Relationship (SAPCR). Other states write it directly into their divorce statutes. The parents didn’t choose to fight for their children, the states chose it for them and the states are violating the constitution to do it.

Here is a real-world example, a couple goes to the courthouse and asks how they file with the court to protect their equal parenting time and tells the clerk that they are in agreement. The clerk directs them to file this as a law suit and the state process begins. In this particular state, the state statutes mandated that a court-appointed investigator search into the lives of each of the parents and make a recommendation to the court. All of this without any allegations or reasons for the court to perform such an inquiry other than the parents came to the court to announce their split and request for protection of their rights equally. These parents are still in battles several years later because one parent was made a visitor in the child’s life and hasn’t been able to have a meaningful relationship with the child.

Getting divorced should be no more difficult than getting married. It should be an administrative process not a judicial suit. There is no conceivable defense to a 1st Amendment free association choice. Neither the other spouse nor the state can force people to remain in an association they no longer choose to maintain.

Likewise, respecting the full, equal, and individual rights of each parent should be the default condition. Ninety-nine percent of parental issues addressed by the courts in a custody dispute are unconstitutional issues for the court to get involved in. When it comes to interfering in the 1st Amendment protected free family association between parent and child, the state may get involved only for narrow issues of the highest order and then only when it is necessary to get involved. One parent asking the state to punish the other parent is neither an issue of the highest order nor is it necessary.

The state may not impose the highest or the best standards on married parents in order for them to retain their free association rights to their children, nor may it impose them on divorced parents. The state may not manufacture harm to a child as an excuse to get involved. It may not say that the exercise of a 1st Amendment right—choosing to divorce—causes harm necessitating state intervention. The state simply cannot protect children from every conceivable harm, nor may it pick and choose groups of parents to whom different standards of harm may be imposed.

The U.S. Supreme Court has said that broad allegations of harm and broad state interests are not sufficient when the state seeks to infringe 1st Amendment rights. The harm must be articulated in precisely tailored language. The state’s interest must be compelling and expressed at the same level of generality as the infringement it is seeking to impose. The only legitimate interest of the state in intervening in the private family realm of the parent-child association is to either protect the equal rights of the other parent or to protect the child from specific harm. Protecting a child from a generalized harm from divorce is not a state interest of the highest order.

Parents should be able to ask for and receive legal documents from the state certifying their full and equal parental rights, certifying those few narrow issues that neither parent may decide unilaterally, and identifying equal periods of time where either parent has the primary right to exercise control, possession, and access. The full and equal rights never change. The only thing that changes is which parent has the superior right to exercise those rights at any given time, given that the parents no longer exercise them together. This doesn’t require an adversarial process. It doesn’t require a judicial process. It can be done administratively, fairly, and impartially when parents have full confidence that their full and equal rights will be respected and protected.

Ninety percent of the evils of divorce are created by the bumbling interference of government agents acting in their own best interests—forcing their biases and prejudices on others for no legitimate reason—not by parents.

For most, these are myths or alternative facts that they have been encouraged to believe by the few. These are lies that the few intentionally perpetrate to increase their personal power, or personal wealth, or to promote their own personal agendas at the expense of children.

The best interest of the child, decided by a sole government bureaucrat is not about helping children. It is about power, it is about money, and it is about punishing divorced parents.