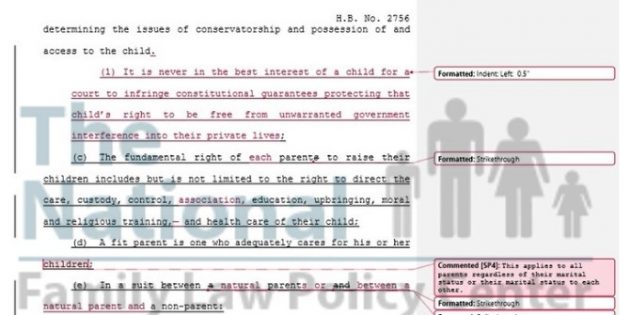 Texas has an opportunity to become the first state to pass a law that is closer than any other state law to truly integrating constitutional parental rights protections language into their Family Code.

On Wednesday the JJFI committee will be hearing public comment on a parental rights protection bill, HB 2756. This bill is great with one major exception, parents going through separation or divorce will still be left out.

The meeting will be held at 10:30 a.m. at the state capitol building in Austin in room E2.012. JJFI stands for Juvenile Justice & Family Issues. Each of the legislators e-mails are linked down below at the end of this post to make it easy for you to click and send them your testimony.

HB 2756 is an attempt to update the public policy and the best interest policy of the state with language from caselaw regarding parental rights — with one caveat — it does not include constitutional protections for two parents in a suit against each other.

The bill reads that these rights apply only to “a suit between a parent and a non-parent,” continuing the longtime bias, wrong, and unconstitutional presumption that when two biological parents are in a suit against each other that these rights cancel each other out and therefore the state may inject its own personal beliefs and biases (viewpoint) according to one sole judicial official. This is viewpoint discrimination and is the reason parents cannot predict what will happen in child custody suits when they go through divorce or separation. This creates inconsistency and instability in families. This is also marital status discrimination, which the Family Code already says is not allowed.

HB 2756 discriminates against children, it creates two separate classes of children. If two parents are in disagreement then the child does not receive these protections. Texas Family Code 153.003 does not allow marital status discrimination. How is two parents in divorce, separated, or never married, suing each other, and the court subjecting the child to lesser protections than the child whose parent is being sued by a non-parent, not marital status discrimination?

This bill clearly leaves the child’s rights subject to this discrimination. Why should a child receive any less protection from government interference into their relationship with each parent just because the two parents are in dispute? Should the child be punished? Should the parents be punished using their child as the source of punishment? This has been decided harm to the child in many cases in the Supreme Court of the United States.

The reasoning behind not including two parent suits are the following:

This is not correct, the legislature cannot authorize the judge to violate constitutional rights. Once the AG decided that fundamental rights are protected at strict scrutiny, it is discrimination based on marital status if the legislators reduce the protections that parents have when facing another natural parent.

This is obiter dicta from Reno but is being used to support continued discrimination of parents changing marital status in this bill.

Strict scrutiny was not argued in any of these cases above. These cases therefore are not dispositive to this issue.

Proper application of strict scrutiny to the fundamental rights of parents protect the children, would relieve the parents from worry about losing rights to their child, allow the parents to more quickly and easily transition to separate family units. This provides the protection of the child’s security and stability to each of their parents. This is more important than a particular house or a particular school. The purpose of protecting fundamental rights is to protect society from the harms that government causes when they violate these rights. A child is already under enough stress when their parents are splitting up or not in agreement, they certainly don’t need to be worried about losing one of their parents time, authority, or influence. Protecting parental rights and the child’s concomitant rights, prevents unnecessary litigation, prevents the need to attack each other, prevents the need to prove one parent is better than the other, prevents the child from being affected by orders that render one parent more important than the other or being influenced to believe that one parent is better than the other. These are all harms that have manifested as increased anxiety, health-related issues, decreased production and potential, and increased violence, and increased suicidal rates in parents and children.

This bill gives you opportunity to reduce the length of time a suit takes. When the court applies the parental rights protections to a parent regardless of who is suing them, if the other party cannot meet the requirements to overcome those protections then the suit ends. The child’s resources that come from each parent then are not used up in legal costs. Guardian ad litems and amicus, and other court-appointed experts are not needed as often. Proving one parent is better than the other is less likely to work to reduce rights. Parents can move on to re-establishing their new normal, they are less likely to be driven into bankruptcy, they don’t have to sling mud, dig up dirt on the other parent, trigger the other parent, and they settle down sooner. How can this not be good for the children?

This is your opportunity to get rid of some of the bad precedent. This can be a new beginning to putting an end to the discrimination by doing something about the language in this bill, HB 2756. This bill gives you opportunity to put some major corrections into the Texas Statutes. (Keep reading, we give you some talking points and have linked each legislator’s e-mail into this post to make it easy for you to e-mail them if you are not able to make the public hearing tomorrow.) This is your opportunity to educate your lawmakers and make a difference. Legislators appreciate all the information and education they can get.

Without the changes we recommend, the family courts will continue their status quo and will continue relying on their own personal beliefs and biased viewpoint of what is in your child’s best interest. The judge and appellate courts will continue to rely on best interest of the child standard (BIC) and precedent between two fit parents who disagree with each other even after this bill passes; if the bill is left with the words “a suit between a parent and a non-parent.” The state of Texas will continue its biased policies based on changing marital status, against divorced and separated parents policies, to continue to hurt children.

When you argue that parental rights apply to each parent individually and not just to parents being attacked by a non-parent in a suit, lead with the following case:

Planned Parenthood of Southeastern Pa v. Casey, 505 US 833, 849, 851, 898, 927, 928 (1992) to start with. (It is settled now, as it was when the Court heard arguments in Roe v. Wade, that the Constitution places limits on a State’s right to interfere with a person’s most basic decisions about family and parenthood, . . . Our law affords constitutional protection to personal decisions relating to …family relationships, child rearing, and education… Our precedents “have respected the private realm of family life which the state cannot enter.” …The Constitution protects all individuals, male or female, married or unmarried, from the abuse of governmental power, even where that power is employed for the supposed benefit of a member of the individual’s family.) [This case is in a white paper or treatise that we teach from. It has lots of other cases and an entire equal protection argument. If you would like a copy of the paper “The Equal Rights of Parents” donate here and a copy will be e-mailed to you and sent to a legislator in your state.]

That price is increased anxiety in children, increased risk of depression, increased risk of making unhealthy choices, unhappiness, parental alienation, effects on their future health and opportunity, and increased risk of suicide to name a few. According to the US Department of Health, children who lack a fulfilling relationship with their father are 63% more likely to commit suicide.  The Center for Disease Control (CDC) reports that 85% of all children who show behavioral disorders come from fatherless homes and the U.S. Department of Health and Human Services found that 71% of pregnant teenagers lack a father.

If you cannot make the public hearing, you can also submit your testimony in writing to all of the legislators on the JJFI committee. You can send your testimony to any of the representatives on the committee and request in writing that your testimony be added. Remember to put all of the following information at the top of your e-mail: Name, Address, Bill number you are testifying on, your position on the bill (i.e. for, against, neutral). An example of how you can state a position is you can state that you are for the bill with a change and state that you want the reference to “non-parent” removed and that you want all parents going through any suit that affects the parent-child relationship to receive these rights protections.

There is also a house witness registration link where you can register in advance to testify in person.

The bill reads as follows:

We requested that this bill be made applicable to all parents regardless of their marital status and regardless of who the suit is between, but this has not been done. Representative Leach is the author of the bill.

We invite you to join NFLPC, become a member and help us continue to help you educate the legislators and the state on your parental rights and your child’s right to be equally protected regardless of whether it is a non-parent or another parent in the suit.

Click on any of the links below and it will take you directly to each of the house representative e-mails where you can write your testimony. Make sure you instruct them that you want this entered officially as testimony. If it is after the date of the public hearing, you can still have your voice heard by e-mailing your testimony to them and letting them know that you want it included in their consideration. If the bill was already voted on in the committee and made it through subcommittee, it is still worth being heard because the bill will have to get to the full floor for a vote from the entire body of house lawmakers. It’s not too late, you can have an impact still and you can make a difference. That difference just might be saving the life of a child from the devastation of loss of one of their fit parents and all of the effects that comes along with that loss.

And e-mail the sponsor of the bill:

This bill has a committee amendment being considered and has been left pending in committee since 4-10-19.