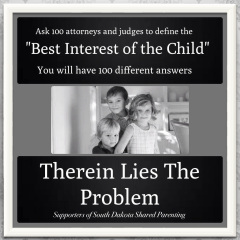 Best interest is an opinion and the family courts throughout the United States have been using this phrase like a magical incantation to obviate and violate constitutional protections for parents and children. This case is a goldmine and it has been hiding in Texas law since 2005! How did that happen. Well, first of all, it is a concurring opinion, that means that it is not controlling. However, concurring and even dissenting opinions do have tremendous impact. Otherwise, why would these justices write them? As culture and times change, concurring and even dissenting opinions can persuade a judiciary to rule in a favorable way to their argument eventually overruling or surpassing the ruling they wrote the concurrence or dissent. That means that new opinion becomes controlling! The legal concept of compelling state interest actually was originally written in a dissenting opinion in another case, influenced the opinion in another ruling, and has now become the law for everyone.

Justice Puryear wrote his concurring opinion in, In Re JRD, and makes a solid case for why using best interest of the child is limited by federal law:

Because of the gravity of the constitutional rights and interests at stake in such proceedings, and because the current standard is based upon outdated notions of parenting that predate the family code and run counter to the legislature’s stated policy concerning children’s best interests, trial courts should justify deviation from maximum feasible time with both parents by clear and convincing evidence and make factual findings, and appellate courts should carefully review those findings.

Justice Puryear recognizes that best interest is not an adequate standard for limiting rights as important as the ones involved with parenting a child:

The custody issue entertained by the court in this case is one faced by trial courts countless times every day. Yet, while the liberty interest at issue is “perhaps the oldest of the fundamental interests recognized,” Troxel v. Granville, 530 746*746 U.S. 57, 65, 120 S.Ct. 2054, 147 L.Ed.2d 49 (2000), the standards by which the trial courts decide and consequently, by which appellate courts review these decisions offer minimal recognition of the gravity of the liberty interests parents and children hold in their relationships and little protection to the individuals involved.

Justice Puryear says that the courts in an effort to dispose of messy divorces and high conflict parents “do not have the discretion to automatically adopt the minimum” or use “best interest” to as a catch-all to justify these improper restrictions and reduction of a parent’s time with their child and their rights to parent that child:

it appears that, to comply with the family code, every court that imposes limitations on a parent’s right to possession of or access to a child by adopting the standard possession order has made an express or implied finding of fact that that particular limitation on the parent’s time with the child is required to protect the best interests of the child. The legislature has declared a presumption that it is in the child’s best interest to have the minimum amount of time with any reasonably safe parent, and it makes no sense — nor is it authorized — to blindly apply that same minimum of time to a parent who is not merely safe but is an interested and active influence in his or her child’s life without regard to the degree of emotional engagement or bonding between the parent and child. Whatever latitude courts have in setting possession periods, they do not have the discretion to automatically adopt the minimum and ignore the legislature’s explicit directive in section 153.193 to allow maximum feasible time with both parents unless doing otherwise would impair the children’s interests.

Justice Puryear has called the trial court’s bluff in Texas and confirms what we have been teaching, that “best interest of the child” (BIC) is not an adequate standard for interfering with the parent-child relationship and that the constitutional default for parenting time and rights to a child must be full and equal in all 50 states, until they have overcome the constitutional presumption that each fit parent acts in the child’s best interest. Therefore, it is the best interest of the child to protect each parent’s rights that enable them to protect the child and fulfill their duty and responsibilities to that child directly.

Justice Puryear also says that best interest of the child is limited by federal case law:

Our government respects fit parents’ abilities to act in the best interests of their children by applying a presumption that they do so. Troxel, 530 U.S. at 68, 120 S.Ct. 2054.

Oh wow, did he just use Troxel? Parents in all 50 states have experienced trial courts claiming that Troxel does not apply to their case because their case is a parent versus parent case where Troxel was a grandparent versus a parent. We have been teaching that Troxel is a parental rights case that applies to all fit parents and this concurring opinion, In Re JRD, has confirmed this. Justice Puryear refers to many other federal cases in his argument too.

Bottom line is that fit parents are to be presumed to be making the best interest decision for their child, the Texas family code is a maximum time family code, and it is in the best interest of the child to protect those rights that allow the parents to continue to have full authority and fulfill their duty and responsibility to their children, and the court cannot take more rights from one parent than from the other, federal cases apply, and constitutional guarantees apply. This means equal time and rights must be the legal presumption. This also means that any judge who says that the Constitution does not apply to his court is wrong.

Thanks to this concurring opinion, In Re JRD, for Texans, you have something you can use as advisory to back up your rights arguments; that federal cases do apply, that the trial court is applying the family code improperly, and that best interest does not provide discretion to a trial court judge to ignore your constitutional guarantees, (best interests is unconstitutional as applied), and that best interest does not apply proper protections for fundamental rights:

The United States Supreme Court has recognized that, in accord with this presumption, so long as a parent is “fit,” there is normally no reason for the State to inject itself between parent and child or disturb that parent’s rearing of his or her children. Id. at 68-69, 120 S.Ct. 2054. In other words, court interference with the right of a fit parent to bring up his or her own child impacts a fundamental right and may violate the Due Process Clause.