Texas Committee Chair Confronts TFLF with “What is Best Interest” 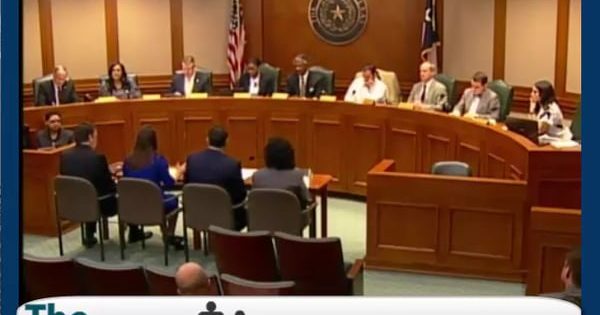 Representative Dutton, chair of the Committee on Juvenile Justice & Family Issues, explained that the Juvenile Justice & Family Issues committee was created in 1995 during the 74th session under Speaker Pete Laney. Prior to that time the family code was addressed by the Judicial Affairs Committee. In 2009 this committee was abolished. Then in 2015 the speaker re-created this committee. A couple of weeks ago, we thought that the committee might be getting abolished again when the entire committee except the Chair was wiped off. Shortly after new members were appointed to this committee.

The JJ committee has jurisdiction to hear the following:

“Sec. 24. JUVENILE JUSTICE AND FAMILY ISSUES. The committee shall have seven members, with jurisdiction over all matters pertaining to: (1) the commitment and rehabilitation of youths; (2) the construction, operation, and management of correctional facilities of the state and facilities used for the commitment and rehabilitation of youths; (3) juvenile delinquency and gang violence; (4) criminal law, prohibitions, standards, and penalties as applied to juveniles; (5) criminal procedure in the courts of Texas as it relates to juveniles; (6) civil law as it relates to familial relationships, including rights, duties, remedies, and procedures; and (7) the following state agencies: the Texas Juvenile Justice Board, the Texas Juvenile Justice Department, the Office of Independent Ombudsman for the Texas Juvenile Justice Department, and the Advisory Council on Juvenile Services.”

Rep. Dutton said that the Juvenile Justice & Family Issues committee will meet on Wednesdays. If you cannot attend in person you can access the archived videos here.

The Texas Family Law Foundation’s speech to Representative Dutton and the rest of the new members started with an introduction of the structure of TFLF. Ms. Sheridan, President of TFLF, introduces TFLF as the lobbying arm of the Texas State Bar Family Law Section. The Family law section is made up of 6000 lawyer members and the Family law foundation has about 800 lawyer members.

Mr. Steve Naylor introduced himself as a board-certified family attorney for over 20 years and married to a board certified family law attorney. He is the current vice chair of the Family Law Section for the State Bar of Texas and is also a member of the Texas Family Law Foundation.

He says that TFLF’s goal is “good solid even public policy.”

Mr. Naylor continues with stating that their next issue is regarding a geographic restriction. (Since he cannot mention the actual bills he is just referring to the issues that the bill addresses because Rep. Dutton said it would prejudice a bill when they are not there hearing bills today.) He says that TFLF wants geographic restrictions to be required to remain in place until a final order on modifications. They do not want any moves outside of what is already in the geographic restricted area for the parents until the court makes a final order.

The other bill issues that he mentioned had to do with child custody evaluation where they would further narrow what a child custody evaluator is required to do, a birthday possession bill where it would be specified the time each parent is entitled to on birthdays, the bill mentioned earlier on allowing a writ of mandamus of an administrative law judge orders, and a bill that would put limits and clarify what happens with property when an order is appealed that addressed property.

Mr. Naylor says that a situation came up recently in three cases where an associate judge would sign a final decree. He says that parties can agree to waive their right to a de novo appeal and allow associate judge to sign the final. The question is that a final order? This bill will clarify that.

Mr. Naylor recommends that the family code be brought into alignment with supreme court decisions.

He also says that TFLF will be opposing some bills.

Attorney Naylor states that TFLF will oppose any legislation “that interferes with a person’s right to file for divorce or drastically increase litigation.”

He reminds the representatives that TFLF has been the largest active section in the state and that they always have two people at the Capitol ready to answer any of their questions regarding bills affecting family law. He also said that they could seek answers from lobbyists, Steve and Amy Bresnen.

Just before they wrapped up their speech to the committee Representative Dutton asks “Should we convert best interest of the child from a factual issue to a legal issue?” He inquires as to whether it is “a legal standard or a factual standard” and wondered if TFLF has ever considered that path. Naylor says they have never considered this and that they tend to rely on the case law and common law. Dutton then clarifies, the Holley standard as the standard that best interest follows. Naylor agreed and they left it at the comment that “that kind of permeates the whole thing.”

The National Family Law Policy Center can clarify something for Representative Dutton. The best interest of the child standard is neither a fact issue nor a law issue. It is an opinion of a sole government official that is used to deprive parents and children of their natural fundamental rights.

Think about this, fundamental constitutional rights can be taken away based on nothing more than an opinion of a government official. Where else in our legal system does that happen? Nowhere.