A recent Texas study found that 87% of the time in a divorce or child custody suit action a child is being stripped of one of their parents and 93% of the time the mother was picked as the primary parent.

Despite the public policy of Texas that parents have maximum time with their children after divorce, this study* found that judges order minimum time on a regular basis. The Family Code has what is called a Standard Possession Order (SPO). This SPO provides a judge with a pre-made parenting plan, that judges are clearly using as a default. The problem? This parenting plan was intended by the legislators to be “the minimum possession for a joint managing conservator.” The legislators provided guidance to the judges that there was to be minimal restrictions or limitations placed “on a parent’s right to possession of or access to a child…” See Sec. 153.193 of the Family Code:

Sec. 153.193. MINIMAL RESTRICTION ON PARENT’S POSSESSION OR ACCESS. The terms of an order that denies possession of a child to a parent or imposes restrictions or limitations on a parent’s right to possession of or access to a child may not exceed those that are required to protect the best interest of the child.

And the legislators further clarifies that the guidelines established in the SPO were only to be used sparingly, not as a default but as an exception between two JMCs:

Sec. 153.251.  POLICY AND GENERAL APPLICATION OF GUIDELINES.  (a)  The guidelines established in the standard possession order are intended to guide the courts in ordering the terms and conditions for possession of a child by a parent named as a possessory conservator or as the minimum possession for a joint managing conservator.

Despite that guidance, this study appears to have revealed that Texas judges are not only defaulting to the SPO and reducing fit, involved, loving parents to minimum time with their children, which results in the child only getting to see one of their parents 4 days a month in the months that only have a 1st and 3rd Friday, but also appear to be converting the legislator’s mandate of “minimum” to mean “reasonable,” as noted by appellate court Justice Puryear in In re JRD where the judge stated that the SPO was “…the standard schedule that every other dad gets.” Why would judges be defaulting to the minimum, well the most obvious conclusion would be that they are being guiding by the Texas State Bar, as we have seen demonstrated through the Bar’s lobbying arm, the Texas Family Law Foundation (TFLF), and being told that this is a perfectly reasonable plan, and that in its expanded form is only 3 days away from being equal. In fact, the TFLF even made claims during their presentations just prior to the 85th legislative session in October 2016, that the noncustodial parent actually has more possession time with the child than the primary custodial parent.

Or perhaps the judges order this because they can, because best interest is a vague and arbitrary phrase and can be used to cover up whatever reason or no reason at all for stripping the children of their fit and loving parent, or perhaps because the Code also states that it “is a rebuttable presumption” that the minimum SPO parenting plan is also considered as qualifying as being “in the best interest of the child.” We can only uncover the results through studies since judges are not required to reveal their thought processes. We must do some comprehensive studies in order to develop a better picture of the results that Texas children are getting currently.

Sec. 153.252.  REBUTTABLE PRESUMPTION.  In a suit, there is a rebuttable presumption that the standard possession order in Subchapter F:

(1)  provides reasonable minimum possession of a child for a parent named as a possessory conservator or joint managing conservator;  and

Looks like a double win for the judges on its face, they can use the SPO, a pre-made template, clear the parents out without having to put much effort into coming up with a more equal parenting plan, and clear the case off their docket more quickly. This might explain why child custody modifications take so long. If parents were already on an SPO and they come back fighting over the parenting plan again, now what is a judge to do? There is no pre-made template for this one is there! Modification cases take the longest to clear the court dockets, longer than any other type of civil case.**

EVIDENCE OF GENDER BIAS IN THE FAMILY COURTS

The trial court judge in the In re JRD case stated on the record that the SPO is “…the standard schedule that every other dad gets.” (emphasis added). This recent study done in Brazoria appears to confirm this father bias.

Despite the TFC attempting to guide judges to place “minimal restrictions” on each parent’s time with their child and that the public policy is that children are to have “frequent and continuing” contact with each of the parents and no sex discrimination, it appears that this study shows that judges continue to regularly restrict fathers to the minimums. The father tallied up how many times judges ordered SPO in February and August of 2016 and out of 399 orders (250 of which were relevant to this study), a judge only ordered more than the SPO once and only once did a judge order the father to be the primary parent!

This father also discovered that 0% of the time did the Attorney General’s office (OAG) (Title IV-D court) award primary parent to the father. The Attorney General’s office uses a standard form for fathers to establish paternity. This form states that the father upon establishing paternity will be subject to child support and a Standard Possession Order.

This father’s study also revealed that even when a father had an attorney, mothers still fared better. Even though there were fewer females with an attorney, 21% females had an attorney compared to 23% males, 81% of the females were awarded primary custody.

Note that this study is a very, very small sampling in the state of Texas. Brazoria county’s population is approximately 346,312 compared to Dallas’ population of 1.318 million. However, what is not affected by the size of the sampling in this study is that the Standard Possession Order is sometimes only 4 days a month! This certainly is not equivalent to “frequent” access to a child.

And if these numbers prove to be true for the entirety of Texas, then this will prove the Father’s Rights Movement is right and that there is gender bias in the family courts.

WHAT THE LEGISLATORS BELIEVE

According to some of the parents speaking to the legislators this year, 2017, some of the legislators believed that judges regularly ordered equal possession time with the children or close to it. In fact, the State Bar’s lobbying arm, The Texas Family Law Foundation (TFLF), was caught teaching the legislators that the Extended Standard Possession order was close to equal and claim that in some years that the non-primary residential parent (still a Joint Managing Conservator) was even getting more than equal time during some years. The parents were attempting to inform the legislators that this was not the case. When the TFLF was asked about their calculations, they claimed that their calculations were based on the children’s waking hours. I guess they never had a child they had to comfort in the middle of the night or take to the hospital when they woke up with an ear infection. I guess they don’t find it valuable that parents read to their children at night and that as the children age they don’t sleep as many hours and many times with teenagers they don’t sleep hardly at all.

The TFLF opposed an equal parenting bill, HB 453, and rather than studying and presenting to the legislators the bias and problems with judges using the current Family Code to strip children down to minimum time with one of their parents, the TFLF instead spent time disparaging others who were trying to inform and educate the legislators. These parents’ voices were necessary because the attorneys working with the TFLF who claim they were there to educate and guide the legislators were only keeping them in the dark.

Sec. 153.193.  MINIMAL RESTRICTION ON PARENT’S POSSESSION OR ACCESS.  The terms of an order that denies possession of a child to a parent or imposes restrictions or limitations on a parent’s right to possession of or access to a child may not exceed those that are required to protect the best interest of the child.

WHAT IS REALLY HAPPENING IN TEXAS?

In an attempt to show what is really happening to children in Texas and to prove that the TFLF during this last legislative session was misleading legislators and using alternative math, one concerned father decided to find out the truth by Quantifying Equal Child Custody in Texas. He took 399 orders from the family court for the month of February 2016 and the month of August 2016 and decided to go through every child custody order signed by a judge during those two months and count how many parents were actually getting equal child custody, what he found is that the majority of parents were being restricted to the “minimum” time parenting plan established by the Texas legislators in the Texas Family Code (TFC) back in 1995. He also discovered that gender discrimination continues in Texas by how many times the court chose one gender of parent over the other. The study found that 93% of the time the mom was chosen as the primary custodial parent and that 82% of the time it was the female who filed first.

The study revealed the following for Brazoria Texas for the months of February and August 2016 in one court — the 300th district court: 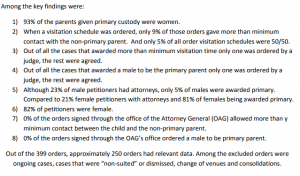 While this study cannot be considered statistically significant and there are lots of researchers out there who could claim that the proper controls were not in place for this study or women’s groups might complaint that it was a father who did this count and therefore biased from the start, this doesn’t change the fact that even one child being stripped of a fit and loving parent is of concern, and children in these numbers being stripped of maximum time and access to either parent is significant and raises very important public concerns.

The Policy Center will be conducting studies to evaluate and examine the results that children are getting in family courts throughout the United States and its territories. You can donate today if you would like to help fund more studies and Policy Center work.

*This study was done by a private individual father and published through the Texas Father’s Rights Movement website. Only the 300th Judicial District Court was used in this study and only two months of orders were counted, February and August 2016.

***The SPO allows the parent subjected to this plan to have two hours on Thursday night with their child from 6-8 p.m.

NOTE: A parent qualifies for the Standard Possession Order if they are a “fit” parent or if they have overcome the presumption that it is not in the best interest of the child. The TFC states that a parent who has committed domestic violence or sexual abuse against the other parent or the child (or a parent who is at risk of abducting the child) “require(s) supervised visitation…by a supervised visitation center…” unless the parent has rebutted the presumption. (Sec. 153.004 (e))