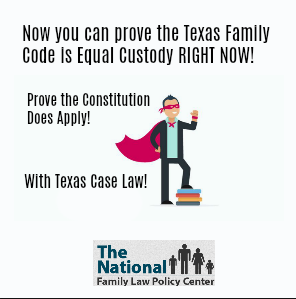 Does the Texas Family Code Already Call for Equal Custody?

Did you know that the Texas legislature intended the family code to be equal custody for fit parents? It is true that the code does not require a judge to order equal custody if it is not in the best interest of the child, but the legislature does appear to intend for it to be equal unless the parent’s home was not safe and stable. Take a look at 153.001. The proper presumption is that a fit parent determines the best interest of the child. The public policy of Texas, Sec. 153.001 reads:

Our legislature has pronounced its policy determination in all suits affecting the parent-child relationship:

(a) The public policy of this state is to:

(1) assure that children will have frequent and continuing contact with parents who have shown the ability to act in the best interest of the child;

(2) provide a safe, stable, and nonviolent environment for the child; and

(3) encourage parents to share in the rights and duties of raising their child after the parents have separated or dissolved their marriage.

Most trial court judges in Texas default to the Standard Possession Order (SPO) in the Texas Family Code, providing only minimum time to one of the parents. One of our most prolific justices noticed this in an opinion where the trial court stated that “there’s no reason why he can’t…have the standard schedule that every other dad gets.”

According to one of the appellate judges in Texas, that default is in error when two fit parents are shown to both have safe and stable homes for the child. Justice Puryear states that it is to be presumed that if parents qualify as joint managing conservators then each parent’s time should be maximum time and that fit parents are “presumed to be acting in their child’s best interest” (Troxel). “The family code does not envision limiting a parent’s time with a child to what “every other dad gets.””

HOW DO YOU GET EQUAL CHILD CUSTODY IN TEXAS?

Justice Puryear further argues that the Standard Possession Order is intended to apply as the maximum for parents who qualify only as a possessory conservator, whereas the SPO is minimum for JMCs.

The legislature has implemented this policy through the following directive to courts “[t]he terms of an order that denies possession of a child to a parent or imposes restrictions or limitations on a parent’s right to possession of or access to a child may not exceed those that are required to protect the best interest of the child.” Tex. Fam. Code Ann. § 153.193 (West 2002) (“Minimal Restriction on Parent’s Possession or Access”) (emphasis added). In order to protect children’s abilities to have a meaningful relationship with their parents, the legislature determined that the standard possession order would set a presumptive minimum amount of time for possession of a child by a joint managing conservator parent. Id. § 153.137 (West Supp.2004-05). In its instructions how to apply the “guidelines established in the standard possession order,” the legislature repeated its characterization of the periods as the minimum guaranteed to a joint managing conservator. Id. § 153.251 (West 2002) (standard order is “intended to guide the courts in ordering the terms and conditions for possession of a child by a parent named as a possessory conservator or as the minimum possession for a joint managing conservator”) (emphasis added).

And stating that “Whatever latitude courts have in setting possession periods, they do not have the discretion to automatically adopt the minimum and ignore the legislature’s explicit directive in section 153.193 to allow maximum feasible time with both parents unless doing otherwise would impair the children’s interests.”

So with a few tweaks and adjustments, the Texas Family Code can not only become constitutionally compliant but also can once again be the leader in protection of parental rights with the presumption of being equal until that presumption has been rebutted. (Read our other post on Standard of Proof and Standard of Evidence here.)

All attorneys can start to change the outcome for their parents right now today.  All attorneys and parents should read Justice David Puryear’s concurring opinion, In Re J.R.D., and incorporate it into their pleadings and their oral presentation to the court for child custody prior to your trial.