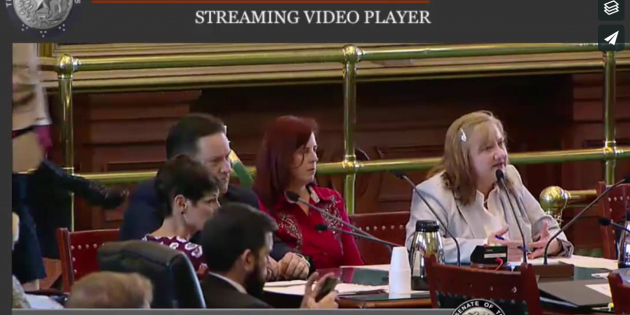 Texas Senate State Affairs Committee held a hearing on a parenting bill, SB 816, on Monday. This one was not your typical parenting bill. This one is attempting to change the best interest statute in the state. If passed, this bill would limit the discretion of the judge in child custody suits brought to the court where at least one fit parent is involved. Here is the text of this bill:

A BILL TO BE ENTITLED
AN ACT
relating to the rendition by a court in a suit affecting the
parent-child relationship of an order that is contrary to the
expressed wishes of the child’s parent.
BE IT ENACTED BY THE LEGISLATURE OF THE STATE OF TEXAS:
SECTION 1. Section 153.002, Family Code, is amended to read
as follows:
Sec. 153.002. BEST INTEREST OF CHILD; DEFERENCE TO PARENT.
(a) Except as otherwise provided by this section, the [The] best
interest of the child shall always be the primary consideration of
the court in determining the issues of conservatorship and
possession of and access to the child.
(b) The court may not render an order contrary to the
expressed wishes of a child’s parent unless:
(1) the court determines that the parent is not a fit
parent;
(2) the order conforms with the expressed wishes of
the child’s other parent, who is a fit parent; or
(3) the order is a compromise between the expressed
wishes of both parents, who are fit parents.
(c) For purposes of this section, a parent:
(1) is presumed to be a fit parent; and
(2) may be determined not to be a fit parent only if it
is shown by clear and convincing evidence that the parent does not
adequately care for the parent’s child.
SECTION 2. The change in law made by this Act applies only
to a suit affecting the parent-child relationship pending before a
court on or filed on or after the effective date of this Act.
SECTION 3. This Act takes effect September 1, 2017.

This bill is sponsored and introduced by Senator Campbell. The bill was brought to Senator Campbell by Jeremy Newman of the Texas Homeschool Coalition (THSC) and their attorney, Cecelia Wood.

The intent of the bill is to protect parents who homeschool their children from having a grandparent, cps, or other third party come in and take their child from them based on homeschooling. The attorney who wrote the bill, Cecelia Wood, has had to take several cases to the appellate court because of a judge overriding a fit parent when a grandparent brought the case before the judge. She won in each case. She told the senate that she brought this bill to them because it was time to put what even the appellate court says is the law, but that the statutes do not reflect it.

The Chair, Senator Huffman, displayed all of the same pervasive, stereotypical thinking that parents deal with in the family courts every day. She expressed concern that this bill would limit the judge’s discretion and prevent the judge from being able to make the decisions for the child when the parent is the one who brought the child there in the first place. She was unhappy that the statute appeared to lock the judge into the decision of the fit parent. And asked the attorney presenting the bill whether the judge would be required to determine whether the parent was fit or not or whether someone else would tell the judge.

(This video is just partial clips of the testimony. The full video is below.)

Because Sherry felt the need to clarify the areas that the attorneys had not, she did not have time to read the actual testimony she had written for the Senators. (You can read her full testimony here.)

Watch all of the witnesses testify:

Attorney Wood testified on behalf of the Texas Homeschool Coalition and Attorney Merritt testified against the bill on behalf of the Texas Family Law Foundation (lobbying arm of the State Bar of Texas). Neither presented the Senators with the statutory standards, already present in the family code, that could properly address and shut down abuses of power.

A vote has not yet taken place on this bill, but the Texas Homeschool Coalition, who wrote this bill, do not have high hopes for the bill getting through the senate this year.

Sherry Palmer opens her testimony addressing a common false belief that Chair Huffman raised before recognizing Sherry to speak. This misnomer is that parents choose to bring their children before the judge, so the judge has the duty now to determine the best interest of the child. You can also read more about the false belief that “parents are there fighting because they want to” in this blog post: Parents Choose to Be in Family Court.

WHAT ARE THE OBJECTIONS OF THE CHAIR?

Senator Huffman inquired as to whether SB 816 was taking away the judge’s ability to hear the child’s wishes. Attorney Merritt (TFLF) responds “yes” and he also claimed that he believed that this bill would increase litigation. Attorney Wood (author of the bill) and others testified that the bill would reduce litigation.
Attorney Wood, also responded that best interest is already limited by case law and the Supreme Court Case Troxel, and that the judge should be considering the wishes of the parents for the child as the proper decisions until a parent is otherwise found unfit.

If you are a proponent of equal rights protections then you might feel that Attorney Wood’s response is perfect. However, she states that if there are two fit parents and they are in disagreement that the judge could make an order that is a compromise. The bill does not require that this compromise treat the parents equally or that constitutional guarantees be provided. It only requires a compromise. Therefore disagreeing parents could continue to receive the same kinds of orders they have been receiving without this bill. Most divorcing and separating parents are dealing with another parent who has not been found to be unfit and not a grandparent or another third party like the THSC senate bill aims to address. Therefore, this bill will not help divorced parents fighting each other.

Mrs. Palmer (NFLPC) provided the information that TRCP 1 of the Texas Rules of Civil Procedure has the requirement that parents receive “a just, fair, equitable and impartial adjudication of the rights of litigants under established principles of substantive law” meaning their rights must be protected. This bill does not require that.

Senator Huffman expressed concern over limiting the judge’s discretion and expressed that in terms of the judge having the ability to determine what is best for the child when the judge disagrees with the two fit parents. We need to ask Senator Huffman if she believes a family law judge has the authority to infringe constitutional guarantees and if she believes the legislature has authority to grant judges such power.

Attorney Wood responded appropriately by stating that the case law requires that the judge consider the fit parent’s determination of what is best as superior.

A little while later, a CPS advocate testified that in the substitution to the bill there is a section that allows the judge to override the fit parents’ determinations, and therefore gives the judge an out.

The National Family Law Policy Center provides the following formal response to this false belief that best interest can override fit parents determinations. Parents have a constitutional right to make their own best interest determinations without government interference. The government has no legitimate authority to choose one parent over the other because the parents’ divorce. The Texas Family Code, where it deals with divorce and child custody between fit parents:

• is blatant DISCRIMINATION BASED ON MARITAL STATUS;

• is a blatant punishment of parents who make constitutionally protected choices which the state doesn’t like; and

• it punishes children for the constitutionally protected choices of their parents.

No state judge may impose his/her opinion of a child’s best interest over the objection of a fit parent until:

• it has shown in the record probable cause to believe its parens patriae authority is invoked through a show cause hearing; and

• it has shown in the record, following a full adjudication hearing providing all necessary constitutional guarantees, that the court has met all constitutional requirements necessary to invoke its parens patriae authority over the objection of a fit parent.

NO EQUAL TREATMENT FOR PARENTS IN DIVORCE
These bills do not protect two fit parents in disagreement. This becomes more obvious in the bill that THSC has attached onto SB 816.

Senator Zaffrini introduced HB 2643 as a substitution to SB 816. You can clearly see in the text of HB 2643 that divorced and single parents who are in disagreement with the other parent are not being provided the same protection as a fit parent being faced with a grandparent or CPS. Two fit parents in disagreement can still be deprived of their fundamental rights without the same protections that a fit parent receives when the opposing party is anyone other than the other parent. Here is the text of HB 2643:

A BILL TO BE ENTITLED
AN ACT
relating to the rendition by the court in a suit affecting the parent-child relationship of a temporary order over the objection of the child’s parent.
BE IT ENACTED BY THE LEGISLATURE OF THE STATE OF TEXAS:
SECTION 1. Section 105.001, Family Code, is amended by amending Subsection (a) and adding Subsections (a-1) and (a-2) to read as follows:
(a) In a suit, except as otherwise provided by Subsection (a-1), the court may make a temporary order, including the modification of a prior temporary order, for the safety and welfare of the child, including an order:
(1) for the temporary conservatorship of the child;
(2) for the temporary support of the child;
(3) restraining a party from disturbing the peace of the child or another party;
(4) prohibiting a person from removing the child beyond a geographical area identified by the court; or
(5) for payment of reasonable attorney’s fees and expenses.
(a-1) The court may not render a temporary order under this section over the objection of the child’s parent unless:
(1) the court determines that the objecting parent is not a fit parent and states on the record the court’s basis for that determination;
(2) the court determines that failing to render the temporary order will cause significant impairment to the child’s physical health or emotional well-being; or
(3) the court is rendering the temporary order over the objection of a fit parent at the request of the child’s other parent, who is a fit parent.
(a-2) For purposes of Subsection (a-1), a parent:
(1) is presumed to be a fit parent; and
(2) may be determined not to be a fit parent only if the court determines that the parent does not adequately care for the parent’s child.
SECTION 2. The change in law made by this Act applies only to a suit affecting the parent-child relationship pending before a trial court or filed on or after the effective date of this Act.
SECTION 3. This Act takes effect September 1, 2017.

After you watch the video of the entire testimony of the day heard in the Senate State Affairs Committee on May 1, 2017 post your feelings about it below. (If you hear something that you feel needs to be discussed please make that comment below this post and we will review your comments.)