How do You Get Equal Custody in Texas? 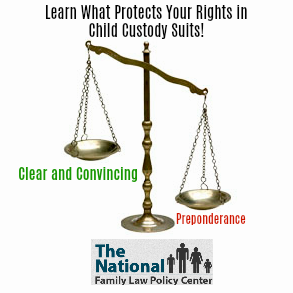 The Policy Center found that as far back as 2005, an appellate court judge said that the Texas Family Code’s preponderance of the evidence standard was too low and should be raised to clear and convincing. He said that parental rights are fundamental and warrant better assurance and protection to protect from risk of error.

Currently the trial courts use preponderance as the standard of proof in child custody determinations between two fit parents. Justice Puryear however says that this standard is too low and creates uncertainty and lack of confidence that the courts provide justice and fairness. Justice Puryear states that he “would urge that the standard of proof in the trial court be re-examined.” Parental rights are so important and fundamental, too important to be risked on preponderance. Because an error can severely limit the parent-child relationship and have the potential to profoundly impair the fundamental liberty interest of parents and children in the parent-child relationship, raising the standard of proof would indicate the gravity of the importance of these rights to the decision-maker.

Combine this with our other article on getting to equal custody using the Texas Family Code now and you can prove that you are not only entitled to equal custody using constitutional protections from the U.S. Supreme Court opinions but also that the legislature intended fit parents and the children to be protected to maximum time. The Preponderance standard of evidence allows this time to be restricted or impacted too easily. Fundamental rights protect parent-child relationships and therefore warrant greater protection from invasion. Therefore, Justice Puryear argues that preponderance is too low.

THE LEGISLATURE INTENDED ON MAXIMUM CUSTODY TIME EVEN IN HIGH CONFLICT

The Preponderance of the evidence standard also falls far short of showing proper respect to the legislature’s deliberate policy decisions commanding Texas courts to support and cultivate relationships between children and their parents so long as those parents are fit and to implement maximum parent-child contact to actively preserve family relationships often made all too fragile by parents’ inabilities to set aside personal animosity long enough to recognize their children’s need for their other parent.

According to Justice Puryear, the reason that parent’s are not getting justice in the Texas trial courts is because the wrong standard of proof is being used, preponderance when it should be clear and convincing. Additionally, the best interest of the child policy is used as magical incantation to waive constitutional review of infringements of parental rights. The court’s never actually say whether custody determinations must survive rational basis or strict scrutiny review. Their opinions routinely just say that the court can overrule parents based on a best interest determination. They simply refuse to even address the proper standard of review:

Despite the United States Supreme Court’s determination to subject infringement upon such fundamental rights to strict scrutiny and of our own legislature’s mandate to preserve and foster parent-child relationships, Texas courts have developed a jurisprudence under which trial court decisions severely curtailing that relationship stand absent an abuse of discretion. See Gillespie, 644 S.W.2d at 451. Considering the importance of and the risk to the rights at issue and the legislature’s clear mandates that courts take measures to protect this most sacred of relationships, I believe we need to carefully re-examine the standards by which decisions that limit a parent’s access to or possession of a child are made and reviewed.

Go here for the next part of How to Get Equal Custody in Texas, and to get the case law related to these posts.

And if you want to become a part of these efforts to educate legislators, the judiciary, and the executive branch on what is required to protect parental rights and child rights in family law, click here. National Family Law Policy Center member